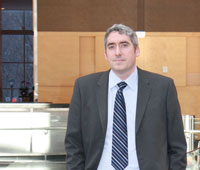 “It’s an off-white wall. There is a whiteboard on it. Underneath that, there is a bookcase with a bunch of books and research reports my firm wrote.”

With that, Matt gave us a peek into the shoot-from-the-hip style he uses on his site, Help Everybody Everyday, where he offers marketing advice and support to those in the architecture, engineering and construction industries.

Matt recently checked in with us to share his take on the issues facing professionals in these industries when it comes to getting business. Here’s what he had to say:

Can you tell us the story behind Help Everybody Everyday?

One day I called up Tim Klabunde, author of Network Like An Introvert. I asked him how he was doing. His response was, ” … just trying to help everybody every day.”

I was just so floored by that statement, because it really describes Tim (a pretty well known rainmaker working in D.C. at the time). But it also harkened to the research of Dr. Robert Cialdini of the University of Arizona, who is probably the foremost expert on persuasion. The totality of my business success can be tracked to a few people – those being the two most important.

The long and short of it is, the best marketing you can do is to help people. There’s actually a lot of scientific research backing that up. To some respect, at the heart of business is this concept that you are providing some value to people’s lives in exchange for money. Someone had to design the bridge my commuter train rides over every day. For that to happen, someone had to convince an agency they were the best firm to design that bridge.

But back to my story …

At the same time, we were contemplating a website redesign at my firm. One of the reasons I started Help Everybody Everyday was for a testing ground for this redesign. I wanted to test what worked and what didn’t. Since I had already been writing for SMPS Marketer and some other industry publications, that was the content I had available to post.

And now it’s the 464,644th most popular website in the world. So yeah, we’re right up there in terms of traffic with some of your top-tier toe fetish sites.

We now have over 3,000 subscribers, and that number is growing very rapidly. I’m blessed because I learn more from them than they ever learn from me. I call them the Help Everybody Army.

What do you think sets your marketing advice apart from other consultants out there?

That’s the thing that makes my site a little different. I’m not a consultant. Each day I go to work in an office doing the same things my readers do. My intention is to help everybody I can. I’m not trying to sell anybody a concept because that’s the service I want you to buy.

I’m saying here’s what works in the real world. I try to solve difficult problems that marketers struggle with. Those problems aren’t always sexy. But they are things that people marketing in our industry struggle with.

Since the success of my site is not tied to my ability to put food on my kids’ plates, there’s a certain freedom that goes along with that. I’ll shoot straight and I’m not concerned about whether people disagree or find it offensive. One of my most loved posts is about biting the heads off kittens (figuratively).

I think my readers appreciate how I exercise that freedom and my entertaining take on their struggles. Everything that comes from Help Everybody Everyday, whether it is a blog post, online course or something else, is a direct result of the struggles my audience have identified.

What are some of the differences in marketing strategies for engineering, architecture or construction professionals compared with other fields?

Let’s take just one of those professions. There’s a popular show about advertising people in the 60s and early 70s. It’s called “Mad Men.”

Think about this. During the 60s and early 70s, architects were barred from marketing their services. If they called Don Draper for an ad, they’d lose their license. No marketing.

Not only that, they couldn’t even compete against each other on price. As I understand it, as crazy as it sounds … all architects had to charge the same price.

The architects that are retiring today are the last generation who started out in that era. They equate marketing to sounding like a used car salesman. They can’t help it. That’s what they were taught.

As an industry, we’ve had to play catch up. But I think as the Sad Men retire the industry will evolve.

Our world is only going to get more competitive, so your firm’s ability to reach an audience that can say “yes” with the right message is quickly becoming critical. More and more, you’ll see our industry adopting the more sophisticated marketing strategies you see in other fields.

What are some of the biggest marketing challenges facing this group?

I think many firms ride the cyclical wave. Right now, for many firms that wave is rising. Finding qualified technical staff to hire is a challenge right now. But this wave is not always going to be up. That wave is going to crash again. I think next time, principals will think twice before laying off their entire marketing staff like some did during the last recession.

So, consistent revenue is a challenge. Differentiation in what is perceived to be a commodity market is also a big challenge.

What are the most common oversights you see those in engineering, architecture and construction make when it comes to marketing?

Maybe not oversights. I think there are common perception issues.

For example, there’s what I call mass superiority delusion. Every architect or engineer believes their team or firm is the best. It’s known as the availability heuristic in science. We don’t truly know our competitor’s qualifications. That information is not readily available to us. So the logical conclusion is that we must be the best choice.

The truth is when I put these people in front of real proposals and ask them to pick a winner, they can’t easily distinguish between one firm’s qualifications or the next.

Another perception issue has people focusing their efforts poorly. They’ll spend hours on the design of their proposal cover and 30 seconds thinking about how to differentiate themselves. What they perceive to be important when it comes to proposals is whacked. Again, make these people choose from a pile of proposals and the covers will not factor into their decision.

What’s the blueprint for a standout proposal?

What’s the blueprint for a standout bridge or a standout hospital? Each RFP and competitive environment is different. I don’t think there is a standard blueprint.

When it comes to proposals, I think process is important. There are many different proposal processes out there. But if you adopted a process like described in Laura Ricci’s The Magic of Winning Proposals, I can’t imagine you wouldn’t win more proposals.

Especially for proposals, there are solutions out there. There are tried and true methods. Unfortunately, many people would prefer to “figure it out themselves.” They’d prefer to do things their way. Since they won a proposal or two, they think they must know what they are doing.

It’s almost like the key is already in the door, but you look at the hinges trying to figure out how you are going to get in.

What are some common things that might make a proposal end up in the trash?

I guess all proposals must eventually end up “in the trash.” But in my world, the biggest problem a proposal can have is with compliance. Especially in the public sector, “non compliance” is a huge danger. Compliance issues are what give people like me nightmares.

What are your favorite tools or resources for writing better proposals?

When it comes to writing proposals, I always talk about the Livescribe Smartpen. But nobody has ever come up to me and said,” Hey Matt, I use the Livescribe Smartpen, too.” For me, the ability to capture everything someone says and connect that to your written notes is very helpful. It is so easy to walk away from a meeting and ask yourself, “what was it she said again?”

I also use text expanders a lot. Text expanders have become so ubiquitous in my life that I don’t think I could survive without them. Again, despite the many times I mention this, I don’t know anybody else in our industry that uses them.

I also use a Wipe Book for my day-to-day note taking.

What about some of your favorite tools or resources for marketing in general?

I have a whole list over at this link.

But I will say the most important tool when it comes to marketing or business development is really mindset. Jay Abraham’s Strategy of Preeminence lays out what I think is the right mindset to have. You have to care about people. You have to want what’s best for them, regardless of your interests.

That’s the mindset I try to bring to all the things I do.