The Role of Human Bones in Architecture 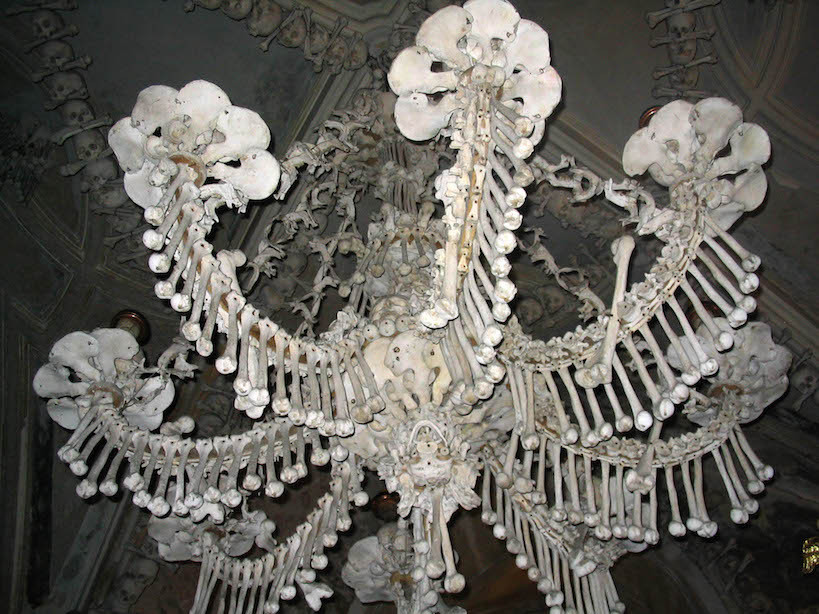 It’s not a haunted house; it’s just a clever way to use excess bones in the Czech Republic.

When you think about a grand church or cathedral, would you ever expect walls lined with bones? Ossuaries exist throughout the world. And while you might think of them as creepy, or at least a bit odd, they do serve a purpose.

Ossuary design in architecture might seem more than a little questionable to someone with a Western mindset. But they’re a part of history that tells an important tale. Here are some of the most exceptional examples, in case you need some travel and tourism inspiration.

You’d never guess what lies within the walls of Sedlec Ossuary.

Sedlec Ossuary in the Czech Republic barely gives anything away from the outside. In fact, it looks like another traditional house of worship. But through its doors, you’ll find stylized arrangements of bones that are nothing short of extraordinary.

The story of Sedlec Ossuary begins in 1278, when a church abbot, Henry, brought back some earth from a pilgrimage to a presumed place of Jesus’ burial. He used the dirt to consecrate the Sedlec cemetery, which made that an extremely popular burial ground. Ultimately, popularity meant that the cemetery could hold no more. And so the excavation began.

In about 1511, according to Weburbanist, bones were dug up. And then in 1870, a local artisan was procured to make something creative from the bones to decorate the church interior. You’ll see an extraordinary bone chandelier, a bone coat of arms, bone crosses, and a virtual sea of bone throughout this remarkable church.

Imagine if this greeted you on your way to chapel!

At least the Capuchin Crypt sounds more like a spot to find human bones. But they’re not tucked away inside coffins. The Santa Maria della Concezione dei Cappuccini church in Rome stands above the Capuchin Crypt, which houses several small chapels inside.

The Capuchin Crypt’s current skeletal design began in 1631, when arriving monks brought with them the bones of deceased friars. Three hundred cartloads of them, to be exact.

As monks and friars died, older bones would be exhumed to make burial space for the most recent dearly departed. Architect magazine explains that Roman indigent children were later added to the crypt, and in 30-year rotations the bones were arranged in interesting, if macabre, ways. 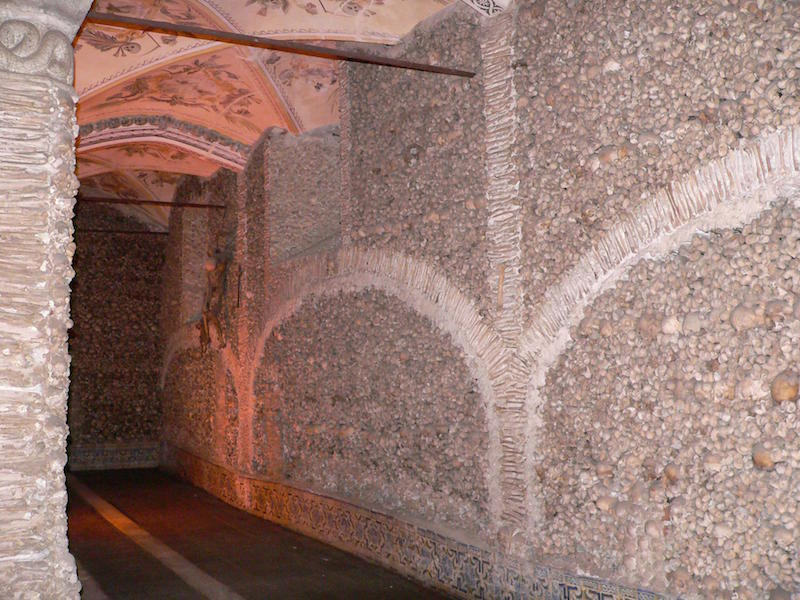 This church in Portugal takes recycling to a whole new level.

As ossuaries go, the Cappella dos Ossos in Portugal has little competition. Virtually no space is uncovered and unadorned by the skeletal remains of former Evora residents. The story of this church, also known as Chapel of Bones, is a little more grim than the others.

During the 16th century, Cappella dos Ossos was instituted to handle the overwhelming volume of remains from cemeteries in the area. Because presumably any church needs a reason to display bones, even in an artistic way, the purpose of this chapel is to remind the living that all things come to an end.

Among the extraordinary bone-lined walls are two figures that rather defy the church’s assertion that their display isn’t to scare its visitors. The skeletons of a man and a young boy hang by chains. Local legend has it that they mistreated the mother of the family, and were cursed for it.

Ossuaries might be a cultural thing. It’s hard to imagine any house of worship in an American neighborhood digging up its cemetery residents to add a little flair indoors. There’s always another cemetery down the street with enough space to accept new residents, so that’s not a good reason, either. But that’s not true everywhere you go.

Ossuaries developed for different purposes. Some needed a way to honor the dead. Some needed space available for new generations to come, even when burial space was limited. All served to solve a problem. And that’s what architecture in any culture does best.

You might not find human bones on your materials list any time soon, but the ossuaries of the world stand as a reminder than thinking outside the box isn’t really a new idea at all.

PDH Academy helps keep your professional development hours current so that you can solve problems in innovative ways for your community. Check out our courses when your next credit hours are due.