From Architecture to Urban Design: A Journey of Discovery 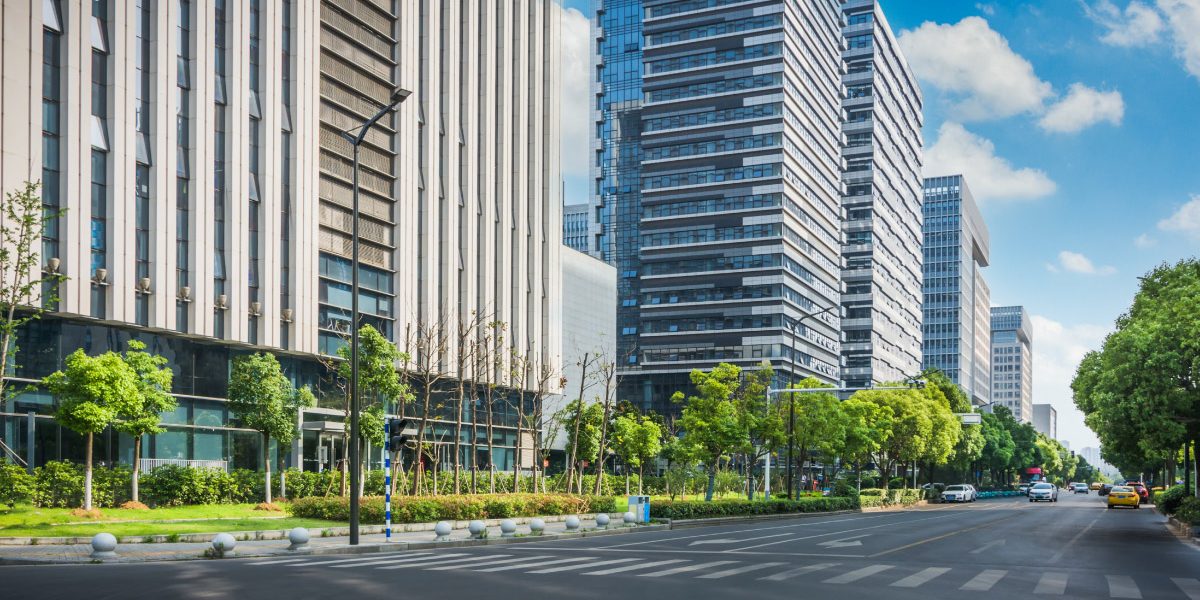 My 50-year journey of learning, teaching, and practicing mirrors many aspects of the major shifts in architecture during that same period (mid-1960s through 2015) – from the orthodoxy of modernist design theory to the free-for-all eclectic variety of post-modernism and, more recently, the increased responsibilities to meet the challenges of climate change and sustainable development. I would like to share my personal experiences to share how I came to understand the overriding importance of urbanism and urban design in architectural practice.

I think anybody who uses the term “post-modernism” does so with the realization of its inherent inadequacy to describe our current mode(s) of practice. We will have to wait for historians to determine a more accurate term to describe what we are doing today – and how theory and practice have evolved from the shifts first recognized in the 1970s and 80s. Just as architects didn’t wake up one morning in the 1730s and announce to the world that they were now going to reject the aesthetics of the Baroque style and design in a new style they would call Rococo, those of us working during the 1970s experienced no “road to Damascus” moment of conversion from modernism to post-modernism. In my case, and I’m sure in the minds of many other architects, the shift grew from a general dissatisfaction with the precepts and products of the modernism we had been taught and a desire to explore beyond the limits prescribed by modernist theory.

My education in urbanism effectively began in graduate school in the UK, when I became involved in tenants’ action groups fighting for better housing conditions. This was the time when the design failings and social misconceptions of public housing built in the 1950s and 60s became increasingly apparent. I worked as a junior architect in the design team charged with creating and managing a massive redevelopment project. Led by the great Anglo-Swedish architect Ralph Erskine, the designers took pains to become the champions of the community, and always tried to put the residents’ interests first, both in design and in community support activities. To make this connection tangible and effective, the architects set up their community design office in the heart of the community. 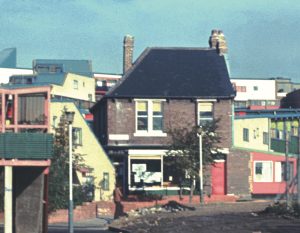 The office became a de facto community center, with architects sometimes leaving their drawing boards to help to residents who had been locked out or wanted to chat about their day. It became increasingly clear to me that two very important aspects of designing in an urban context were not adequately covered in the classroom. Our educational emphasis was on concepts such as “truth to materials” (like exposed raw concrete!) and a singular focus on the individual building as a self-referential art object. Now, in practice, I was learning that the urban spaces between the buildings and the opinions of people who would use our buildings and live in the neighborhood were as important, and some would say more important, than building tectonics or plan functionality. Instead of focusing primarily on the “building-as-object,” and developing the building form directly from the functionality of the plan, I learned from Robert Venturi’s book Complexity and Contradiction in Architecture (Museum of Modern Art, NY, 1966) the following bombshell (and I paraphrase): Architecture occurs at the plane of the wall, where the pressures of the plan meet the forces of the context.

Venturi was teaching us that the properties of spaces outside the building – street, plaza, square, park, etc., plus the forms and scale of adjacent buildings – were important determining factors in creating the architecture of a building. They were essential partners with the demands of the plan and the tectonics of materials. While the “pressures of the plan” radiate outwards, the “forces of the context” apply a countervailing force pressing inwards on the building form.

Once my belief in the primacy of plan, program, and materials was challenged, certain things became obvious. While modernist redevelopment in Britain destroyed countless older buildings many examples were retained and found a new life adapted to new and different uses. The forms remained but the functions changed – often drastically. This simple realization that form does not follow function seems obvious today, but in the days of high modernism during the 1950s and 60s, the theories and dictums of the modern masters reigned supreme.

So, it was no surprise that modernist-inspired practice had very little time for existing buildings; they were considered impediments to creating the “Brave New World” in war-ravaged European cities, and this cavalier attitude to older buildings and their embodied history spread easily across America in the post-war decades of the 1950s -1980s. A personal anecdote may help to emphasize this point.

For thirty-five years my father served in the British Royal Navy, stationed at sea for long periods. During the Second World War, his home port in southwest England was heavily bombed by the German air force, resulting in most of the center city being destroyed. All that remained was the pattern of streets, filled with fire-scorched rubble. Familiar buildings and landmarks ceased to exist. My Dad wasn’t stationed there again until a few years after the war ended, and I recall him expressing his bafflement at not recognizing his city. The whole central area had been completely rebuilt on a new plan. Not a single street that he remembered remained. Instead of the historic, idiosyncratic pattern of connected streets, squares, and alleys, the urban core now comprised a series of politely dull pedestrian plazas on a 90-degree grid inside a multi-lane ring road. Dad was unable to get his bearings in his hometown: He had to chart a new and alien landscape.

Today, good urban design practice is much more receptive to the presence of history and cultural memory, and once we know where to look, some key polemical and practical origins become clear. Three deserve special mention. We have already noted Robert Venturi’s seminal book Complexity and Contradiction in Architecture, from 1966. In the UK, Gordon Cullen’s book Townscape (1961), and republished for American readers in edited form as The Concise Townscape (Architectural Press, 2005) helped awaken designers to the beauty of the nation’s historic towns, and the barrenness of modernist development.

Cullen’s seminal work inspired another influential publication, The Essex Design Guide for Residential Areas (1973), which, to use today’s terminology, has a clear claim to be the first “form-based code” for new development. (Form-based Codes are discussed in Unit 4 of the course). This design guide firmly planted the notion of contextual design in the minds of architects.

The Nexus Between Plan and Code

The last twenty years of my career have focused on master planning and writing form-based zoning codes. Experience has taught me that these two activities should go hand in hand wherever possible; master plans without codes to regulate them usually remain as pretty drawings, unimplemented, and gathering cobwebs. Equally, zoning codes without a design vision to inform them cannot be tailored adequately to the needs and opportunities of a community. This nexus between plan and code is a crucial area of professional engagement in current urban design practice. Masterplans usually have a time horizon of anywhere between five to 20 years, and range in scope from a single neighborhood to a whole town, or sometimes even a small city. Extracts from a good example of the relationship between neighborhood masterplan and its associated form-based code can be seen in these images from the town of Clemson, SC. 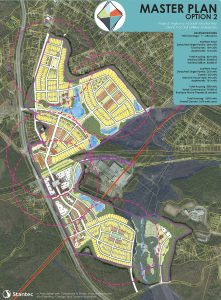 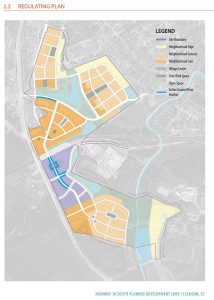 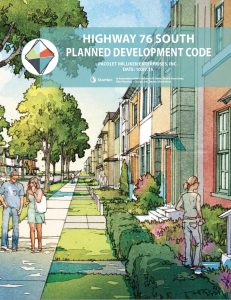 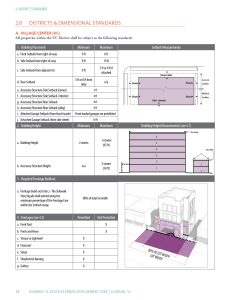 I would like to emphasize one last point from my personal experience to bind architecture and urbanism together. I worked in England on what we now call in the USA “adaptive reuse projects” long before the concept became mainstream in America. In the 1970s, the President of the Royal Institute of British Architects, Alex Gordon, issued a challenge to the profession based on a new mantra: Long Life, Loose Fit, Low Energy. This means designing buildings for the long term, focusing on adaptation rather than demolition (by designing in ways that can accommodate change), and avoiding wasteful use of resources.

This polite polemic that shaped my practice back then forms the essence of “sustainable design” today. Gordon’s remarks identified a break with our modernist, function-driven agendas of the early post-war decades, and the embrace of adaptability, flexible uses, and building longevity has profound implications for urban design, where the timescale of our projects is sometimes measured in decades rather than months or years.

Our education as urban designers, whether we start out as architects, landscape architects, planners, environmentalists, or community activists, provides us with a heightened understanding and a sharpened focus on the complex web of forces that shape our towns and cities. Moreover, we learn the necessary skills to take leading roles in creating the changes and improvements that our urban environments so urgently need. We establish civic patterns that can last for generations. That’s an awesome and energizing responsibility!

For eleven years Walters taught and practiced in England, where he won national awards for housing and urban design. In 1983 he resigned his Senior Lectureship at Plymouth Polytechnic, now Plymouth University, and moved to the US. Once in the US, Walters began teaching and practicing in Mississippi, Arkansas, Texas, and Oklahoma before joining the Charlotte faculty in 1990.

What You Need to Know About LEED for Existing Buildings
May 30, 2018
Applying LEED Principles to New Construction Buildings
May 24, 2018
Go to Top