Taliesin West will be preserved, but some aren’t so sure about the school that it was created for.

Few names in architecture are more iconic than Frank Lloyd Wright, and few designs are more of a fixture than Taliesin West. Progress means that the campus is on the docket for restoration. But progress is also why those plans are bittersweet.

The buildings might very well be returned to their former glory by the plans of Harboe Architects of Chicago. But the FLW School of Architecture – the whole reason the campus exists – is standing on unsteady ground.

Taliesin West for and by Architects

When Frank Lloyd Wright purchased the 600 desert acres outside the city limits of Phoenix, the plan was to build an architect community. Like other FLW designs, Taliesin West was created to blend into and complement its environment with similar lines as the desert and using local materials.

For 20 years, FLW and his apprentices built, rebuilt, reworked and reimagined Taliesin West. It was an ongoing project that evolved continually. And that is sort of the point. As a learning community of architects, Taliesin West was never really finished. And that’s where the current restoration project sees a bit of inspiration and hope.

Separation of the Foundation and School

In an ironic twist, the FLW Foundation and the FLW School of Architecture have now split. Architect magazine’s Henry Grabar says that’s because the Higher Learning Commission says schools must be separate from their sponsoring organizations. The school has a fundraising deadline which it might not meet. That means the school might cease to exist by year’s end, while Taliesin West, as a set of buildings, moves ahead with restoration.

The whole point of the community was just that – to be a living, working community of about 20 architects at any given time. Without the school, many fear that a big part of its identity would be lost. The campus gains most of its revenue from tourists, so the site could become a time capsule or a destination of a school and community that used to be. 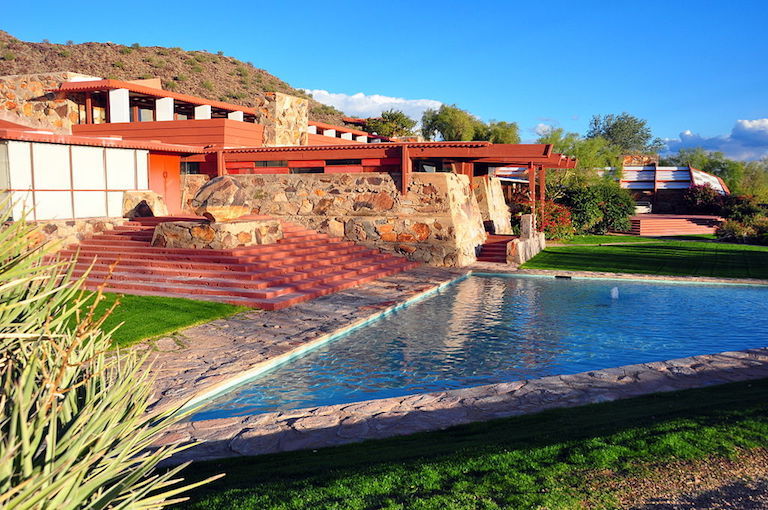 Some features, such as the pool, could meet the restoration chopping block for lack of authenticity.

Unlike the precarious position of the school, the campus as a whole is likely to experience a nice bit of protection and restoration. At first, says Grabar, preservation plans were a bit worrisome. With so much change over the decades, and much of it at the hands of FLW himself, how could a single plan develop for the purpose of restoration? How could architects nail down one point in its history at which to reset?

That’s where the beauty of possibilities emerged. Taliesin West is, and has always been, a fluid project. It’s never been finished, nor was it likely ever intended to be. While some so-called improvements are easy to part with, architects are also free to select what is and was best about the campus and return it to a state that FLW might stamp with his own approval. At least temporarily, until his mood changed again.

For more than a year, Harboe and team researched, studied, conducted interviews and worked diligently to fine-tune a restoration plan for Taliesin West. And although some have grave concerns about the future of the FLW School of Architecture, others are much more optimistic.

Students are the heart of the campus, whether or not tourism is its big money maker. The restoration plans make clear, according to Grabar, that the school and residences of Taliesin West can never truly be separated from the whole. It’s what makes the community a real, living thing, so it’s as much of a priority as any physical restoration efforts.

Just as preservation of an icon such as Taliesin West is an ongoing project, so are the continuing education credits that all architects must earn. At PDH Academy, we take the hassle out of the process so that you can get back to the work that you love. Check out our courses for architects when your next professional development hours are due.