How St. Patrick’s Cathedral Prepared for the Pope 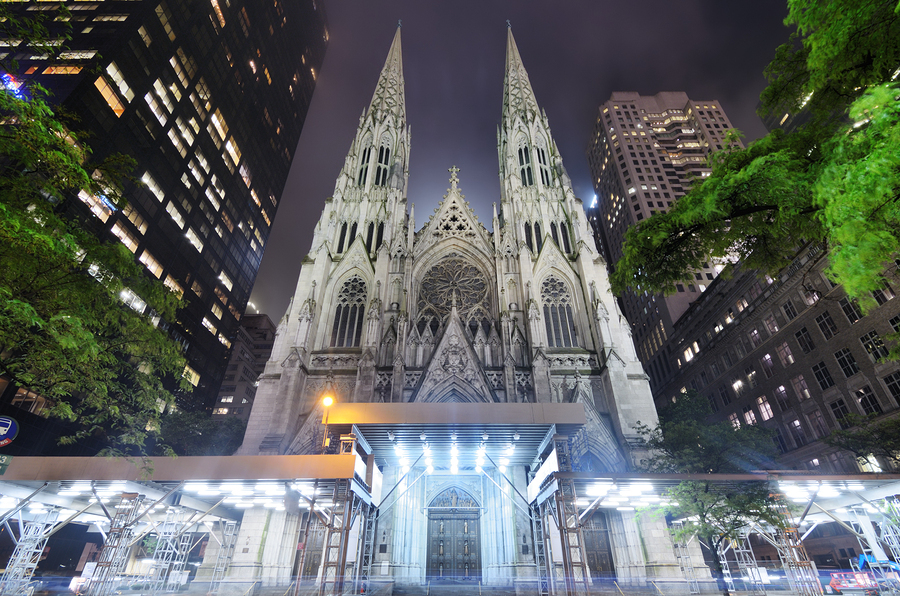 New York’s landmark cathedral welcomes visitors even as it undergoes a monumental renovation.

It isn’t every day that the Pope leads evening prayer anywhere in the U.S. So when his schedule included St. Patrick’s Cathedral in New York City, a multi-year renovation of the church was quickly wrapped up in time for the occasion. This article explains the process of repair and restoration that took place before the visit of Pope Francis on Sept 24.

The Gothic Revival mother church of the New York City’s Catholic archdiocese, was last renovated in the 1970s on the centennial of the building’s opening. Since then, four decades of candle smoke turned the painted ceiling plaster from its original ocher-painted color to a dull olive green.

Outside, Cracks had appeared in the exterior marble, and air pollution had turned its natural white to a dirty gray. “You would have seen chips [of marble] falling off the building,” said Jeffrey Murphy, AIA, a founding partner of Murphy Burnham & Buttrick (MBB) who led the $177M restoration.

These conditions led New York’s archbishop, Cardinal Edward Egan, to call in 2006 for a three-year, three-phase renovation of the cathedral, which is on the National Register of Historic Places. The project team would touch every surface and feature of the landmark building. “There’s woodwork, stained glass, protective glazing, bronze doors, wood doors, and six types of stone, which all require different treatments,” Murphy said. Delayed by the 2009 recession, the work did not begin until 2011. But that gave the team time to research. As few digital records of the building existed, the team developed digital drawings and input them into building information modeling software (Autodesk BIM360). This would prove to be an advantage when the project completion date was moved up to accommodate the Pope’s visit.

A tour through the restoration project at St. Patrick’s Cathedral

A team of 150 restoration specialists worked on the building, performing many of the repairs by hand. Workers began by cleaning and repairing the marble stones of the twin 330-foot tall spires, working their way down to the ground.

Hasty repairs to the marble joints in the 1970s were made with Portland cement, which cured much darker than the stone. Furthermore, the mortar, which was harder than the marble itself, caused some of the blocks to crack. These joints were cleaned and re-pointed as a part of the restoration.

Inside the cathedral, a two-bay-wide, rolling scaffold system was erected around the church’s triforium, spanning the nave and its aisle. As workers moved the scaffolding from east to west through the interior, specialists from local restoration firm Building Conservation Associates meticulously inspected the cathedral’s stained and deteriorating ceiling to recommend repairs. The ceiling consists of plaster affixed to wood lath ribs – a precursor, of sorts, to cast stone. After the ceiling was cleaned with a chemical latex peel, three tints of cream paint were applied to the ceiling to reflect the design vision of architect James Renwick, who designed the building in 1858. 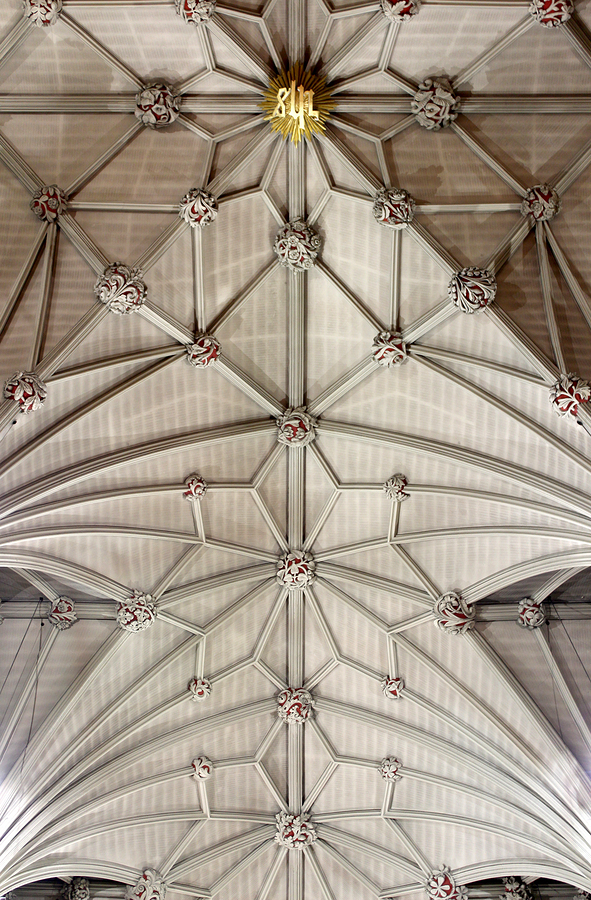 The ornate plaster ceiling reflects the light that now fills the cathedral space.

Updating the historic (but technically obsolete) ceiling construction to meet modern fire-safety standards was a twofold challenge. After the plaster and adjacent attic space were cleaned and repaired, the team installed a high-pressure, nitrogen-propelled, misting sprinkler system that requires a fraction of the water used by conventional sprinkler systems to suppress a fire. To Murphy’s knowledge, St. Patrick’s is the first U.S. cathedral to use this system.

Throughout construction, the project was managed with Autodesk BIM360. The 150 restoration specialists uploaded notes, progress photos, and project documentation for the cathedral’s 30,000 exterior and interior repairs to the cloud-based program via iPads. This workflow permitted real-time updates to the project team at large. The project was largely complete in the summer of 2015 when word came that Pope Francis would be visiting the cathedral on his US visit. The project schedule was expanded to include Saturday shifts.

“When we heard the Holy Father might come,” Msgr. Robert T. Ritchie, the rector of St. Patrick’s, said, “our very hard-working restoration team really went above and beyond, and achieved the milestone of having a scaffolding-free interior so that we could fit as many people as possible into the cathedral to see Pope Francis.”

The bronze doors were polished, and during the renovations, the doors were left open, to bring more light into the interior, and also as a symbolic gesture of welcome to the cathedral’s approximately 5 million yearly visitors.

On the morning of September 24th, crowds formed behind barricades lining Fifth Avenue for a glimpse of the Pope, who arrived that afternoon in a modest Italian car with a yellow papal flag.

The evening prayer service included the St. Patrick’s Cathedral Choir and Orchestra performing selections from the mass by Palestrina, as well as works by Mozart and others. In his homily, The Pope remarked, “This beautiful Cathedral of Saint Patrick, built up over many years through the sacrifices of many men and women, can serve as a symbol of the work of generations of American priests and religious, and lay faithful who helped build up the Church in the United States.”

PDH Academy helps keep you at your professional best for your important projects. Check out our courses for architects when your next professional development hours are due.